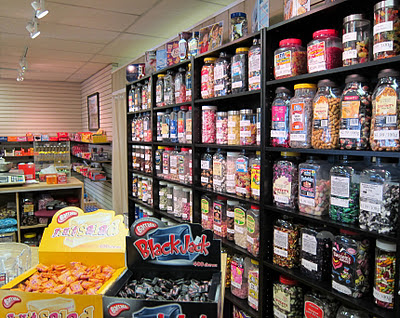 My parents were British, and I have spent many happy months in England visiting family friends and relatives. I used to enjoy shopping at the Canadian outlets of Marks & Spencer and was very sorry when they closed, so I was delighted to learn that Saskatoon now has its very own British food store.

Brit Foods is located in Cumberland Square, in the covered alleyway just down from Safeway. It’s a treasure trove of British food. The owner, Tony Badger, says they try to stock the national brands, so you’ll find soups by Marks & Spencer and Baxter’s, Yorkshire and Typhoo tea, Heinz beans, Rose’s preserves, Thornton’s chocolates, and Walker’s chips. 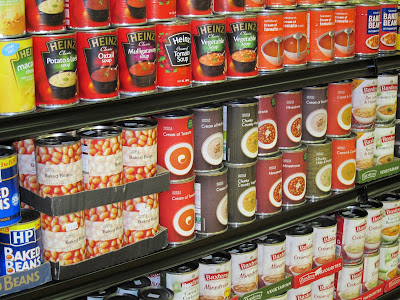 In addition to the food products (primarily packaged although there are pork pies and a few other items in the freezer), there is an entire wall devoted to loose candies. You can also pick up a linen tea towel or an English magazine.

There is a second Brit Foods in Parksville on Vancouver Island, but Mr. Badger says that the demographics are quite different. Parksville is a retirement community, whereas Saskatoon has a number of younger British families who came to Canada to take advantage of work opportunities (truck drivers, electricians). 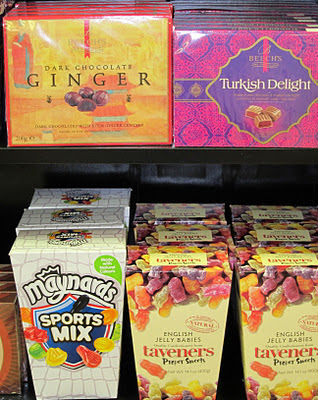 Some of the most popular food items in Saskatoon are the crisps, chocolate, pop and squash as well as the sauces and preserves (Bisto, pickled onions). 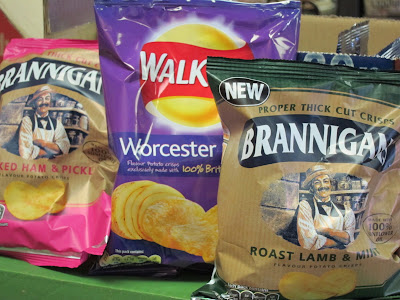 You don’t have to be British to enjoy shopping at Brit Foods. It’s always fun to sample something new – pickled walnuts, cloudy lemonade, mulligatawny soup. Be sure to try the British chocolate – it’s much richer and tastier than the North American versions. And don’t miss the potato chips that come in an amazing variety of flavours – from roast lamb & mint, to steak & onion, to smoked ham & pickle.

Brit Foods is open from 10 am to 5 pm from Monday to Saturday. They will be open on the first three Sundays in December, 2011 from 11 am to 3 pm.
Chocolate England Saskatoon

Unknown said…
A few days back, I went into Brit Foods to find a gift for a friend of mine. I was impressed with the selection of goods for the size of the store, and the lady attending the shoppe was quite friendly.
I didn't find what I had been looking for, but I did find something else. A certain sweet that featured prominently in the show Doctor Who, way back when.
Yes, I found jelly babies.
Of course, being a fan of the show and having wondered what they were like, I couldn't resist purchasing some to try. I decided to share them with my family that evening while we watched a classic episode of Doctor Who. As we watched the show, I slyly brought out my jelly babies in their white paper bag, turned to my family with a huge grin, and asked "Would you like a jelly baby?"
That just made everyone's day!
Now, everyone wants some more and I suppose that I'll just have to pop by and pick some up. And while I'm there, perhaps I'll pick up a few more treats for us to try!
November 2, 2012 at 11:18 PM

Penny McKinlay said…
I believe they do sell frozen pork pies - would be worth checking it out.
September 1, 2016 at 5:12 PM

Popular posts from this blog 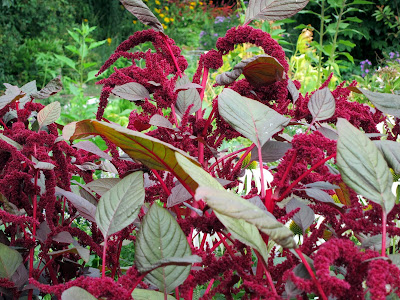 Prairie Harvest Café I was sad to learn that Prairie Harvest Café has closed its doors. It’s been one of my favorite Saskatoon restaurants since day one, and I really appreciated the fact that the chefs focused on cooking with local ingredients, many supplied by the Saskatoon Farmers’ Market. All the best of luck in your new adventures. We’ll miss you. Hug a Farmer This has been a tough summer for many farmers. Prairie Sun Orchard lost their entire cherry crop to insects. Drop by their stand at the Saskatoon Farmers’ Market, tell them you care, and have an ice cream. My favorite is the chocolate cherry fudge, but Clare Pearson, the principal ice cream maker, says her new favorite is the salted caramel. Peppers If you’re like me, you assume that all small, skinny peppers are super hot and avoid them like the plague. But that’s a big mistake. Kaleidoscope Vegetable Gardens is offering two long, skinny peppers – one can be hot, but the other isn’t. Padron chile pepper
Read more 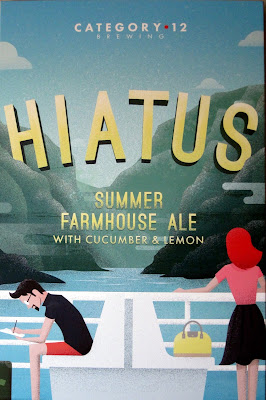 The Next Great Food Business Public Tasting, Sept. 7 The Local Kitchen is hosting a public tasting with samples from each of the finalists in the Next Great Food Business competition. Finalists are: King’s Jerky, Kind Condiments , Smoke and Salt BBQ, Bannock Express , and Voodoo Van . Wine Tastings Guess the most expensive wine (Sept. 8), sample some Rhône wines (Sept. 22), or attend the 2017 Premier Showcase Wine Dinner (Sept. 28) sponsored by Saskatoon Co-op Wine Spirits Beer. Premier Showcase is also offering a Portugal with a Splash of California wine seminar (Sept. 29) and a Women & Whisky seminar (Sept. 30). Refresh and Renew I had a chat with Trent Loewen about his plans now that he has sold Earth Bound Bakery. He is heading east to visit chef friends in Ontario and then off to New Zealand to explore what's happening there. After 9 years with a single focus, it's time to explore new ideas. Interestingly enough, the bakery's new owner is a business
Read more 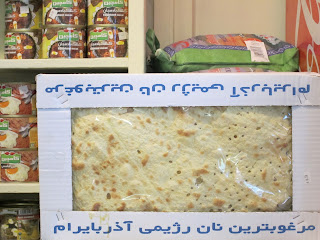 Mulberries, Pomegranate Sauce, Dried Lemons, Kashk and Doogh From the outside, it looks like an old-fashioned corner convenience store. But step inside, and you quickly realize that you’ve discovered a Middle Eastern treasure trove. The Persian Store at 223 – 25th Street West is operated by Mahyar Behnami, who has been in Saskatoon for two years. The store serves an Iranian/Persian community of approximately 500 people, but it’s an opportunity for all of us to try new things. Mrs. Behnami kindly gave me a tour of the store and explained how the different dishes and ingredients would be served in Iran. Canned Goods There is a large assortment of ready-made, canned dishes. (The stews are always served over rice that is dry, not sticky.) Ghormeh sabzi is often considered the Iranian national dish. It contains herbs, dried lemon, onion and red beans – you can add your own meat. The herbs usually include parsley, leeks/green onions, cilantro, spinach and fenugreek, and the
Read more

The Golden Towns of Beaujolais 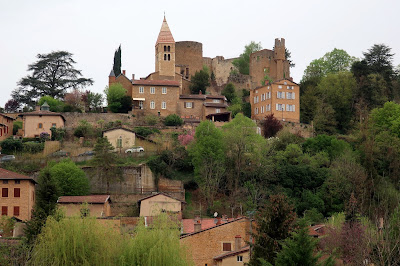 Heading north out of Lyon, you pass through a long tunnel and exit into a lush green countryside leaving the city far behind. You then turn and head up the hill onto winding roads between a patchwork of vineyards. Many of the vines are really old with short, thick, twisted trunks and a thin stem of green leaves and buds. These are the Gamay vines of Beaujolais, interspersed with a few fields of greener, leafier Chardonnay vines. South Beaujolais, just 45 minutes northwest of Lyon, encompasses 25 medieval villages of orangey-gold stone (limestone and iron) that is surprisingly vibrant (I had been expecting something lighter, similar to the Cotswolds in England). Some of the villages still have the remains of 14th century castles. Oingt is classed as one of the most beautiful villages of France and it really is lovely. You can take a walk around the town on the former ramparts and the church is austere and beautiful. I was on a half-day tour , which combined stopping to
Read more 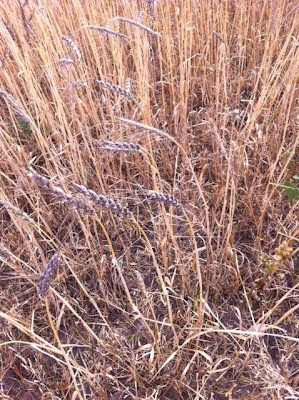 When I was growing up, whole wheat flour and rice were exotic options. Now we have a whole range of intriguing choices – buckwheat, spelt, millet, kamut – the list goes on and on. My problem is that I don’t know very much about some of these grains, so I arranged a phone call with Nicole Davis, the Owner/Manager of Daybreak Mill near Estevan. Daybreak Mill grows and processes approximately 18 different kinds of flour, whole and de-hulled grains, flakes, cereals, and legumes. They are 100% organic. “We want people to have access to healthy, wholesome food,” Nicole explains. Two of Daybreak’s products – spelt and millet – have been nourishing people around the world for over 9,000 years. Spelt Spelt was cultivated by ancient civilizations in Europe and the Middle East for thousands of years. It grows well in poor soil and doesn’t require fertilizer. It’s resistant to frost and the thick husk protects the grain from insects. However, spelt requires more processing than wheat as
Read more

Penny McKinlay
Saskatoon, Saskatchewan, Canada
I enjoy exploring and writing about my world - the people, the food, the ideas.